This is the horrifying moment that a party of visitors managed to survive in Kyrgyzstan after being swept away by a strong ice avalanche.

When the group was on a guided trip in the Tian Shan mountains in Central Asia, enormous chunks of ice and snow started rushing down the mountain towards them. The group was made up of nine people from the United Kingdom and one person from the United States.

Harry Shimmin, who is from the United Kingdom, is the one who captured the movie and then shared it to Instagram. He stated that he was snapping pictures when he heard the sound of “ice shattering.”

The footage shows him holding his ground as the avalanche hurtles down the mountain towards him, and then at the last second, he ducks behind a boulder to protect himself.

Harry reported that, as the avalanche moved over him, he feared for his life but miraculously emerged from the ordeal “without a scratch.”

He wrote on Instagram “9 Brits and 1 American on a guided tour of the Tian Shan mountains in Kyrgyzstan. We’d just reached the highest point in the trek and I separated from the group to take pictures on top of a hill/cliff edge. While I was taking pictures I heard the sound of deep ice cracking behind me. This is where the video starts. I’d been there for a few minutes already so I knew there was a spot for shelter right next to me. I was on a cliff edge, so I could only run away from the shelter (hence why I don’t move). Yes I left it to the last second to move, and yes I know it would have been safer moving to the shelter straight away. I’m very aware that I took a big risk. I felt in control, but regardless, when the snow started coming over and it got dark / harder to breath, I was bricking it and thought I might die.

Behind the rock it was like being inside a blizzard. Once it was over the adrenaline rush hit me hard. I was only covered in a small layer of snow, without a scratch. I felt giddy. I knew the rest of the group was further away from the avalanche so should be okay. When I re-joined them I could see they were all safe, although one had cut her knee quite badly (she rode one of the horses to the nearest medical facility). Another had fallen off a horse and sustained some light bruising.

The whole group was laughing and crying, happy to be alive (including the girl who cut her knee). It was only later we realized just how lucky we’d been. If we had walked 5 minutes further on our trek, we would all be dead. If you look carefully in the video, you can see the faint grey trail winding through the grass. That was the path. We traversed it afterwards, walking among massive ice boulders and rocks that had been thrown much further than we could have run, even if we acted immediately. To make it worse, the path runs alongside a low ridge, hiding the mountain from view, so we would have only heard the roar before lights out.” 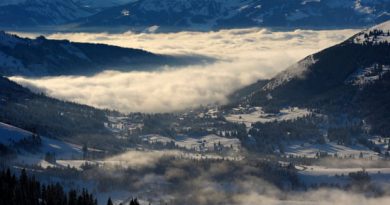 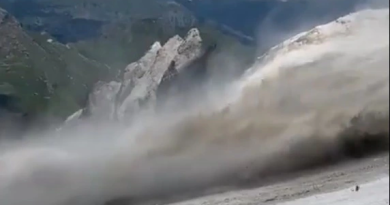