2 dead after shooting in Whistler Village near Sundial Hotel

The brother of a gangster who was killed in Coal Harbour, Vancouver, was shot and killed Sunday outside a hotel in Whistler.

Meninder Dhaliwal, 29, was shot in the middle of the day in a busy commercial area of Whistler. Shortly after the shooting, gruesome video of Dhaliwal and another man lying face down began to spread.

Sources have confirmed that Dhaliwal is dead. His brother Harb was killed last year in Vancouver. No one knows for sure how the second victim is doing or who he or she is.

No further information has been made public by either the Whistler RCMP or the Integrated Homicide Investigation Team as of yet.

FOX3 was told by residents of the neighborhood that the shooting took occurred close to the Sundial Hotel and that Whistler has been placed under lockdown as a result. And they added that a car was later discovered burning at Creekside; the characteristic of recent gangland murders has been a suspect automobile that was set on fire after the hit.

Harb was shot and killed outside of a fancy restaurant in Vancouver’s Coal Harbour in April 2021. Meninder was with Harb and Barinder at the time.

Meninder gave pursuit to the hitman for two blocks before stabbing him in the eye. Despite this, he was never charged with assault in connection with the incident.

In May of 2021, the remaining two brothers, Barinder and Meninder, were two of the six gang members profiled on a warning poster that was distributed by the Vancouver Police Department.

Today, Sunday, July 24, 2022, more than two dozen law enforcement agencies are reacting to a gunshot incident that happened close to the Sundial Hotel in Whistler Village, Canada. The Fitzsimmons Express and the Whistler Village Gondola are currently on an immediate lockdown as police respond to an allegation of an active shooter near the bar, according to law enforcement agencies.

Authorities claim that two people who had been shot at the scene have been found. Despite the two people’s efforts to be saved, paramedics who arrived on the scene declared them dead.

Residents and businesses have been told to lock their doors right away, and everyone is being told to find a safe place and stay there. Reports say that the person who is currently shooting is NOT in custody at this time. The suspect, who hasn’t been named, is free and on the run. The Royal Canadian Mounted Police think the suspect is still in the area.

At the moment, there are a lot of police at the scene and other places in the area. At this time, there was no quick information about what the shooter looked like. A lot of people are looking for the shooter in different parts of Whistler Village right now. After the shooting, which many people have described as heartbreaking and scary, no other shooting victims have been found.

Cargo explained, “I was out here just simply checking at some bikes… and I heard gunshots.”

“Then, a little kid from [Mountainside Lodge] came running down, came tearing down here, and said there was a shooting down there.”

Cargo said that his first thought was to shut the store down.

“I locked the doors, kept everyone in the store, and instructed everyone to stay away from the window. 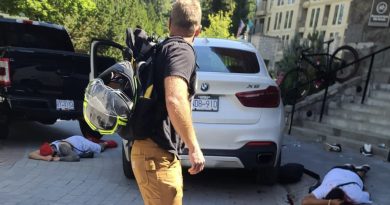 2 dead after shooting in Whistler Village near Sundial Hotel