A SINGER Yrma Lydya was shot dead by her elderly husband Jesus Hernandez in a restaurant after trying to divorce him for months, it’s alleged.

Jesus Hernandez, 79, shot and killed Yrma Lydya, 21, in a private room at a Japanese restaurant in Mexico City, police say.

On Thursday of last week, folk musician Lydya was shot and died while she was dining at the venue in the Benito Juarez district.

During the argument that took place in the private room, it is said that Hernandez pulled a gun on his young wife and shot her three times in the chest.

In addition to this, it is asserted that he and his bodyguard, Benjamin Hernandez, then tried to flee the scene in a luxury car before being caught by the police.

According to the claims, Hernandez then attempted to bribe the officers so that they would let him walk free.

After making an inquiry in April to a law company about initiating the divorce process, Lydya was the victim of the horrific killing.

According to the Mexican newspaper Excelsior, as evidence she displayed photographs of her face that had been bruised as a result of multiple incidences of domestic violence.

In December, Lydya reported to the police that her husband had assaulted her on multiple occasions, including one in which he threatened her with a firearm and battered her.

According to the Milenio news network, Omar Garcia Harfuch, the chief of security for Mexico City, stated that Hernandez had a meeting with two people at the restaurant at 2:00 p.m. on the previous Thursday before leaving at approximately 6:00 p.m..

After some time had passed, Lydya showed up to the cafe, and according to the allegations, shooting was heard throughout the establishment after she and her husband had begun to dispute.

A witness stated on the TV program Primer Impacto that Hernandez was restrained by a police officer who was present at the restaurant. The officer hurried inside the private area.

It was confirmed by Harfuch that the singer passed away after receiving three gunshot wounds to the chest during the altercation.

Both Hernandez and his bodyguard had their initial court appearance on Sunday, and they are currently being kept in pretrial detention at a prison in Mexico City, where the investigation is still ongoing.

The defense attorney entered a not guilty plea and argued that he was not responsible for the death of Lydya, who was scheduled to appear at a concert in California on Saturday.

Following the judge’s denial of Hernandez’s request to serve his sentence at home due to his advanced age, Hernandez is scheduled to appear in court once again on Thursday. 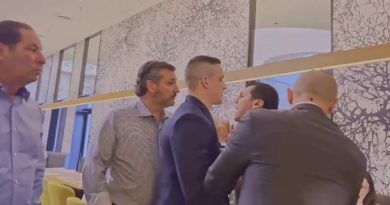