The ShopRite employee Daniel Gill who was arrested for allegedly slapping Rudy Giuliani in the back at a store on Staten Island was released from custody on Monday after his charges were reduced.

Daniel Gill, 39, was arrested on Sunday and still wore his ShopRite uniform as he left Staten Island Criminal Court on Monday after his arraignment. He kept his head down and wouldn’t answer any questions.

In light of the fact that the incident that took place inside the grocery store was caught on camera, the accusations against him were reduced to those of third-degree assault, third-degree menacing, and second-degree harassing.

Gill, who did not have any previous convictions, was initially charged with assault in the second degree involving a person over the age of 65.

Gill was released on his own recognizance after the judge, Gerianne Abriano, denied the application for supervised release that was submitted by the Staten Island District Attorney’s Office.

During the arraignment, Susan Platis, Gill’s defense attorney, had argued that the incident appeared to be more of a touch on the back rather than a slap.

“This does not constitute unlawful contact, and it is quite improbable that the touch resulted in any injury.” It is therefore a stretch to label this an assault in the third person, or even to call it menacing.

The prosecution, on the other hand, was adamant that the “attack was of an aggressive type.”

Mr. Giuliani was made uncomfortable and off-balance as a result of the defendant punching him in the back. [Giuliani] put one foot in front of the other to steady himself… ‘What’s up, scumbag,’ the suspect asked him at that moment, the Assistant District Attorney Darren Albanese told the judge.

Albanese stated that despite the fact that the former mayor of New York City had refused medical assistance at the scene of the incident, he was now complaining of swelling and “far more agony” a day after the incident.

This comes after Giuliani had earlier asked for Gill to be locked up, stating that he might have easily been murdered if he had been knocked to the floor.

During a virtual press conference held prior to Gill’s court appearance, Giuliani stated that the individual in question should be incarcerated.

The former federal prosecutor was similarly critical of the decision to reduce the charges against the defendant, saying, “finally, I thought we had a DA in New York in Staten Island who was a real DA in favor of protecting victims and not letting criminals go free.” 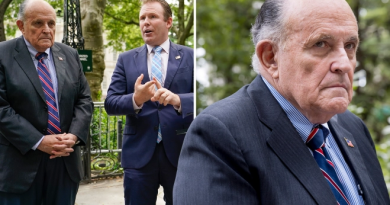