A heartless Russian lady has reportedly been imprisoned for selling her newborn kid to pay for a $3,600 rhinoplasty.

According to sources from the Daily Star, the woman, who is 33 years old and whose name has not been made public by Russian media, was brought into custody at the end of May on suspicion of being involved in the trafficking of human beings.

It is reported that the mother gave birth to a baby boy on April 25 at a hospital in the city of Kaspiysk, located in the southern region of the country, and then sold him off just five days later to a local couple that was wanting to become parents.

Newsflash got a statement from Russian officials that said, “The heartless mother met with a local resident and agreed to give up her helpless newborn son in exchange for 200,000 rubles ($3,200).”

On the same day that she allegedly gave the boy over to his new parents, she allegedly provided them with a “waiver for the rights to the child.” In exchange, a modest up-front payment in the amount of $360 USD was made to her.

On May 26, less than four weeks later, it is believed that the woman received the remainder of the cash; however, the police were tipped off shortly after the transaction was completed.

It is unknown who called the police, but the woman, along with the man and woman who had unlawfully adopted the newborn son, was hauled into custody almost immediately after the call was made.

The woman is said to have given the newborn child to the new parents along with the baby’s birth certificate, but the new parents denied having paid any money to the woman for the infant. They reported that the mother then requested $3,200 USD to cover the expense of a nose operation for the sake of “improved breathing,” and that they were pleased to comply with her request.

The mother was seen in a police photo smiling after being apprehended, and it is apparent that she was unable to get her rhinoplasty done before authorities caught up with her.

According to reports, the official Russian statement went as follows: “At the present time, a number of investigation operations are being carried out, the goal of which is to establish all of the circumstances surrounding the commission of the crime and to consolidate evidence of the suspect’s guilt.”

According to additional statements made by officials, “She is accused of committing a felony under paragraph “h” of Part 2 of Article 127.1 of the Criminal Code of the Russian Federation (buy and sale related to a person who is in a known condition of helplessness). 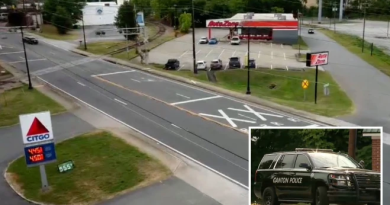