A YOUNG student Naira Ashraf has been stabbed to death in public as she stepped off a bus after turning down a marriage proposal from an obsessed stalker.

According to the authorities, Naira Ashraf Abdel Qader was attacked multiple times with a knife by a male student whom she had previously blocked on Facebook.

A young woman was found stabbed to death in the middle of the day outside of her university in the north of Egypt. The suspect, who the police believe to be another student, is currently in prison.

Naira Ashraf Abdel Qader was brutally murdered in front of horrified witnesses and in plain view of security cameras, and the country of Egypt has been left in disbelief as a result of this act. After being repeatedly stabbed in her neck and chest outside of the entrance to Mansoura University, images of her body have been shared throughout various social media platforms.

According to the police, they have a suspect in jail who has said in interrogation that he was driven to kill her because she had refused to interact with him on Facebook and marry him.

According to the Egyptian news site Al-Falah Al-Youm, the suspect, identified only as “Mohammed A,” was arrested at the scene and told the prosecutor yesterday that Ashraf had blocked him on social media and that he had made several attempts to contact her over the course of a year and a half during which “she became famous” and accumulated a social media following.

According to a report from Najum Masria, an additional Egyptian news site, the victim’s father disclosed in a TV interview that the accused had threatened Ashraf on multiple occasions, and that the family had reported these threats to the police. The interview took place in Egypt.

Human rights organizations have been extremely vocal in their criticism of the Egyptian authorities for their failure to safeguard women.

According to Amnesty International’s most recent country report, Egyptian authorities are failing “to prevent and investigate pervasive violence against women and girls,” according to the organization’s findings. In addition, Human Rights Watch asserts that Egyptian authorities “rolled out a widespread campaign of arrests and prosecutions targeting women social media influencers, in violation of their rights to privacy, freedom of speech, and non-discrimination.” [Citation needed]

Video footage of the attack and a throng approaching the site has gone viral, with people around the Arab world condemning the death. This comes despite warnings to cease distributing surveillance footage of the crime on social media. 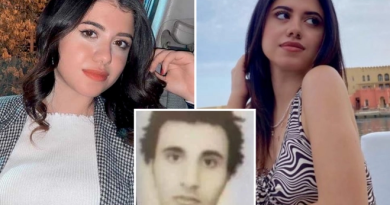