‘Please say a prayer’: Travis Barker’s 16-year-old daughter shares photo of the Blink-182 drummer in hospital as he’s treated for a mystery illness in Los Angeles with wife Kourtney Kardashian by his side

Alabama, Travis Barker’s 16-year-old daughter, posted a picture of him in the hospital and asked for “prayers” for him just hours after he was rushed to a Los Angeles hospital with an unknown illness.

The teen posted an update on her TikTok page that has since been deleted. It was a picture of her holding her 46-year-old father’s hand, with the caption “Please say a prayer.”

Although the picture did not reveal Travis’ face, it did show him sitting up in a hospital bed while clutching his phone in his hand. Although a white medical band was seen on the rocker’s right wrist, Alabama disguised the rocker’s personal information by posting a heart emoji in place of the bracelet on their Instagram account.

Kourtney Kardashian and Travis Barker have recently exchanged vows, one of which states that they will support one another “in sickness and in health.” Unfortunately, Travis Barker was recently admitted to the hospital, and his new wife was there to support him.

Barker and Kourtney initially presented themselves at the West Hills hospital on Tuesday morning for a medical concern over Travis’s condition. It would appear that the medical staff at West Hills felt Travis need extra care, as he was subsequently transported to Cedars-Sinai Medical Center by ambulance after their assessment.

Kourtney, who was dressed in all black and wore a hoodie over her head, trailed the ambulance very closely.

At this time, neither Travis’ current condition nor the nature of the urgent medical situation that led to his admission to the hospital are known. During the encounter, he tweeted out the phrase “God save me.”

Naturally, the health issue occurs just one month after the couple exchanged vows in front of their closest friends and family members during a multi-day event held in Portofino, Italy. 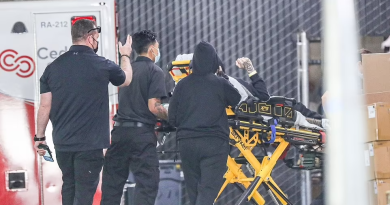