The injured person is a Fred Meyer employee and is currently listed in critical condition and undergoing surgery at a nearby hospital.

Richland police investigators confirmed that the first gunshot victim inside the Fred Meyer location had an altercation with the suspect before he was shot. They also confirmed that a second victim—an employee of the grocery store—is in critical condition and is currently undergoing surgery this afternoon.

This interaction was captured on one of the store’s security cameras, but it’s unclear what the conversation was about or whether there was a previous connection between the suspect and victim.

READ MORE STORIES:  Aaron Christopher Kelley identified as a suspect in the shooting at the Richland Fred Meyer

Though police investigators are not prepared to offer the suspect’s name to the public, they are currently pursuing all leads. Cpt. Chris Lee says the person of interest had a previous history known to the police department, but nothing related to weapons.

While Richland police investigators don’t believe there is an active threat to the community, they ask that Tri-Cities community members remain vigilant as they search for the suspect to bring him into custody.

Eyewitness says that around “a dozen” shots were fired

An eyewitness who was inside the Fred Meyer supermarket told reporters that he heard “around a dozen shots fired” during the shooting.

The man told KAPP/KVEW-TV reporter Neil Fischer that following the gunshots, “he rushed to try and help an employee who he says had been shot.” At least one person died as a result of the shooting, it is unclear if this was the individual that the man attended to.

In addition to the one death that law enforcement has so far confirmed, at least one additional person was injured during the shooting. The suspect remains at large, and police say that they are “actively looking for [him].”

An eyewitness to the aftermath of the shooting described an unfolding and chaotic scene as people scrambled for cover.

“The terror in the eyes of these people that came and took cover in my shop – I have never seen terror in anyone’s eyes quite like what I saw there,” the witness said during an interview with KIRO news radio.

The witness did not identify by name, but may have been the proprietor of one of the store’s located near Fred Meyer. The grocery store was the scene of a morning shooting that left one person dead and another person wounded. 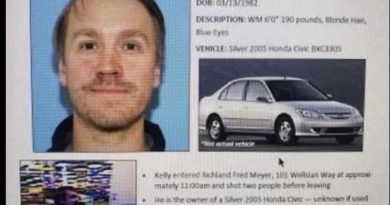 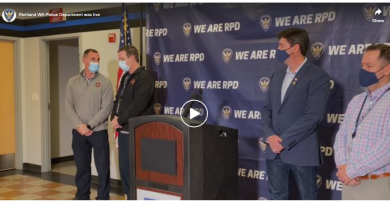 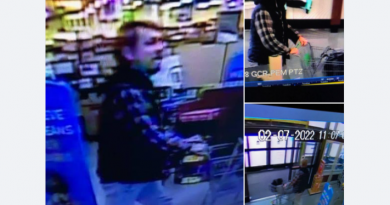 Richland Police will give a statement on fatal Fred Meyer shooting incident at 2:15pm at the Media Staging Area